Zadar is a city of northern Dalmatia in Croatia, more than three thousand years old and located on the Adriatic Sea. It is the second largest city in Dalmatia and the fifth largest in Croatia. Zadar is full of historical and cultural insights and by the natural location and environment is very attractive and touristic heritage.

Zadar measures a total land area of about 194Km2. It is surrounded by hundreds of islands and isles. It is separated by the narrow strait known as the Zadar Strait from the archipelagos of Ugljan and Pašman of Croatia. 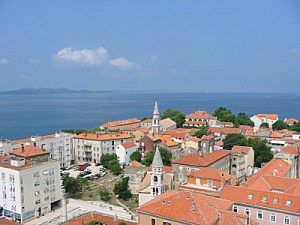 St. Donat’s Church is the best sustained and excellent building of Zadar. It is considered to be the most significant building of Zadar. It has now become a museum where cultural programs are held. There are 34 churches present in the old town that carries substantial history. The oldest among them is the St. Simeon. St. Mary is also one of them. St. Anastasia is the most popular cathedral. The oldest university of Croatia also one of the oldest in Europe is the University of Zadar that was established in 1396. There is also the Archaeological Museum. Light and Sound of the Sea Organ on Zadar’s Riva is another place of interest that attracts tourists. The remains and preservations of The Roman Forum is also an outstanding place to enjoy.

The administrative area of Zadar also includes some islands and villages located nearby.
The villages include:
1. Babindub
2. Crno
3. Kožino
4. Petrcane
The islands include:
1. Ist
2. Iž
3. Molat
4. Olib
5. Premuda
6. Rava
7. Silba

The transportation in Zadar constitutes of airways, sea routes; roadways and railways through the interior of the city. It is an important traffic point.

And don’t forget Zadar, that is Trajadera